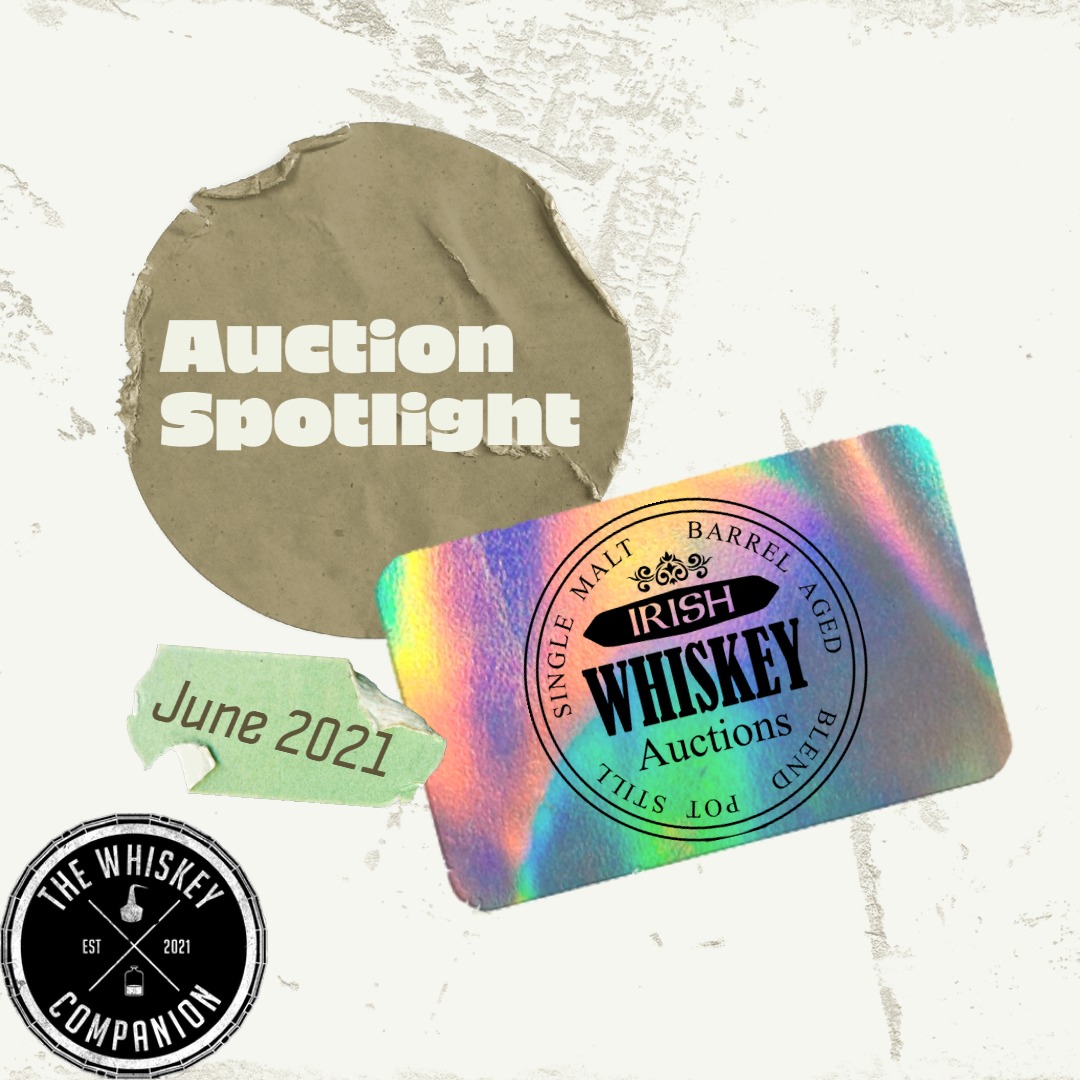 Welcome back to another edition of Auction Spotlight where we take a look at the price differential between an auction and the previous 3 month prices to get a feel for where the market is at.

I’d like to first say thanks to my patrons, I couldn’t do what I do without their support and they’ve allowed me to work on some really cool projects like live auction searching and even an android and iOS app to be your virtual Whiskey Companion! If you’re so inclined, you can signup here to gain access to our collection tracker, tasting journal, whiskey exploration, wishlist and many more features(access to the latest data is locked for patrons, but you get a good sense of the value with a free account too!). You can support me on Patreon to gain access to additional whiskey valuation tools and support what I do for as little as 4 euro a month while supporting a small Irish business with many goodies planned for later in the year, and gain access to the app beta immediately. The soft launch of the app is imminent so be sure to signup to the newsletter or current web application to be among the first to know!

This auction spotlight we take a look at Irish Whiskey Auctions latest (June) auction vs all sales from the 28th of Feb, to the 31st of May inclusive. This months auction for IWA was a bit later in the month than we’re used to, and with 6 other auctions running and ending in quick succession it was definitely an interesting auction to analyse. I’d like to congratulate Anthony and Katie on their new website and it’s first real world test, the difference is night and day with the old one and I was pottering away at 6:59 searching around for any last minute deals and the website didn’t skip a beat! Great stuff!

Now, for the numbers of the auction which there were quite a few shockers. As always we’ll start out with my ‘watchlist’ where I earmark certain bottles or new releases that caught my eye during the auction to give an indication of some sort of value.

Dingle Single Malt B1 CS: There were 2 of these highly sought after expression in this months auction, with a pretty wild variation in price. One had the hammer come down at €1,000 which isn’t too far off what you could expect given the previous 3 before that went for €1,250 and €1,235, €785. The second, however, only managed to pull in €600 leaving the average here at €800. A 27% decrease on the previous 3. Edit: the second that went for €600 was actually a mismatched bottle tube (regular Single Malt vs Single Malt Cask Strength.
Dingle An Chead hOcht: When this was released, I wasn’t sold on the fact that it would be a money maker – Dingle FF/batch releases had fallen to the side over the last year or so but has seen a bit of a resurgence in price especially in the Cask Strength batches. This particular one was sold at retail for €170. Steep enough for an 8 year old CS whiskey, but it exceeded my expectation in this auction finishing up at €300, a 76% increase from retail. Keep in mind, this was the only one in the auction, so I will be keeping an eye on it in the coming auctions.
Bushmills Artist Reserve(1985): A beautifully presented bottle of Bushmills here, distilled in 1985 and aged for 15 years exclusively in sherry casks, it doesn’t turn up for auction too often. The last time we seen it was in WhiskyAuctioneer in early Feb where it got €666 and before that was a couple of years ago on IWA going for €420. Considering it achieved €600 that’s a slight dip from the last seen auction (-10%), but an increase from the last IWA (+43%).
Jameson Caskmates – Angel City (LA): A very rare bottle in the Caskmates series, with only 3 being sold at auction since its release. The last time it came up was in October 2020 where it achieved €630. It’s gone above and beyond that to an eye watering €730. Astounding really seeing as it’s a $40 retail bottle!
Lockes 34 Year Old The Last Cask: A piece of Irish Whiskey history here, being one of the last casks from Kilbeggan, distilled 1st of March 1946 and aged 34 years before being bottled in 1980 by The Uisge Beatha Malt Whiskey Co in London. A similar lot went on Whisky.Auction for €2,210 in March of 2020, but this blew that out of the water commanding top €€ at €3,600!
Ballykeefe Distillery Single Cask (CS): A first for the list, and a first from Ballykeefe. This is their inaugural release of 7 casks. I’m a bit puzzled tho as I thought they had 2 releases, one at cask strength with glasses and one at 46% without the glasses and this seems like it has a cask strength in a 46% box. Not sure what’s going on there! I have reached out to ballykeefe for clarity on this, and if they get back to me I can update the analysis, but for now it achieved €391. The glasses + CS retails at €450 and the 46% at €195. Edit: I have been contacted to clarify that the releases were from cask 11-17. 1600 bottles total of the 46% release (790 gone to retail), 490 at cask strength with the 2 hand cut crystal tumblers and a further 77 (11 from each cask, which was this particular lot.) sold at cask strength without the tumblers, sold from the distillery, retail €295. Knowing that now, it’s a good return of 33%

These are all of the ‘usual’ collections people would be watching. Constantly updating tables are able to be found under ‘Price Logs/Whiskey Views’ when you signup for an account on the website.

All bar the 1990 American New Oak taking a big hit in this auction, begs the question whether people have collected everything they wanted already, the new collectors that bought in due to having extra money are now trying to offload for cash with the country starting to reopen or another factor? Make’s for an interesting read.

¤ Previously sold with glasses, so take with that what you will.
Lots of red here, somewhat expected for the regular releases as we’ve seen recently the focus being on the cask strengths as a collection, but even the cask strengths took a fairly big hit. Maybe we will see some new collectors come in for this now that Dingles core expression is out and it may drawn in more who wouldn’t have tasted the whiskey they produce.

The 8UP shows at auction sporadically through the last year, ranging from €125-€205 averaging around the €140 mark so a decent average this auction. Chead hOcht I spoke about at the start, and the 2 others showing a small but sustained growth so that’s good to see!

As always, Dunvilles keeping fairly steady in prices, with the 12 PX CS 1703 being the most sought after this month climbing 26% and the 1327 cask falling 25%.

The greenspot single casks have never really achieved much over their retail, but there was a bit of an increase in the last 3 months. It looks like that wasn’t to last and they all fell apart from the 26 year old from TWE which increased on auction price, but still hovers around retail.

The Rarest Vintage Reserve showing a strong increase here capitalising on its initial increase earlier in the year. The St Patricks day 2014 took a nosedive from previous auctions dropping 50%. With no St Patricks day bottle this year, it may be a slow down of new collectors of the set.

Overall here it looks like the Caskmates series is a steady ship with the infrequent Angel City showing an impressive hammer price, and Young Henrys getting a high return from earlier in the year.

JJ Corry has been a bit of a mixed bag over the last year or so and this shows no different. The Anfa and Milroys are the obvious winners here.

Some good news for the Killowen Kult here seeing the prices come down, in some cases like the peated, hungarian and txakolina going under retail and the cúige set dropping by almost 50%. The Pinot Noir for some reason getting a huge amount of attention going for €180. Probably the nicest of the lot for me, taste wise. The Rum Raisin was the latest release, sold at retail for €60, getting €110. Nice return, but it remains to be seen if that will continue.

Overall we see an 11% decrease in the full MVR line-up here, but we did have some outliers like the 1987 dropping 54%, but it had no box or paperwork, 79% increase of the 2013 US edition but even removing both those outliers its still 12% decrease. We knew the monthly 10-30% increases couldn’t last, and with the country really starting to open up I think we’re seeing the supply that was bought up over the lockdown by newer collectors who may need the money now for other things. Definitely going to be an interesting quarter to see how these prices move.

With the dreamcask 29 being released, we usually see some extra activity around the previous dreamcasks, but never would I have guessed we would’ve seen a 50% increase on DC32. The 14yr small batch have been stead the last while and julios batch D seems to be one of the most difficult to obtain commanding €800 hammer price, 41% increase.

The renaissance 1 skyrocketed in the last auction, but as usual people seemed to chase last months buyer with 5 going to auction, and averaging €210. Although the Renaissance 2 increased 12% its still just hitting retail really.

Waterford had a fairly green month last month but that plus seems to have been cancelled out with this months losses. The majority here falling below retail, so a good opportunity to buy and drink if you thought the RRP of 70 is on the higher side!

A great showing here from infrequent cask strength bottles in the 2012, 2013 making some serious money. Elsewhere fairly big drops including the seaweed IPA

Well I hope that’s given a good insight to how the market was, and bottles performed in the last IWA. I will try have the Celtic Whiskey Auction spotlight up this weekend as they are planning on going to a monthly format. Please let me know if there’s anything you’d like covered or any shockers for yourself.

If you’d like to see reviews, news, and other great things on YouTube check us out, subscribes, likes and comments very much appreciated!